Growers are encouraged to be aware of Pink Root in onions after a warmer than average autumn. Pink Root is a fungus whic...
Scroll to Read
Meet The Team: Carlos Ramirez - Regional Business Manager, VIC & TAS
Prev
Meet the Team - Linda Ferrarese
Next

Growers are encouraged to be aware of Pink Root in onions after a warmer than average autumn.

Pink Root is a fungus which affects the roots of onions. The plant’s root system is halved, severely limiting its uptake of water and nutrients and lowering the productivity of the crop.

Seminis Technology Development Specialist Julio Ducatti says the disease has been recorded in most onion growing areas of Australia and New Zealand.

“The fungus can live in the soil for years, feeding off available organic matter and increasing in number with each new crop.

“Onions are fussy about the soil they like to grow in and as the area available to production decreases the fungus is becoming more prevalent globally.

“Climate change is also having an impact as soils warm creating the perfect environment for the fungus.”

He said growers could recognise Pink Root by pulling the plant from the ground and checking its root system.

“The roots are pink in colour and lack vigour. You may also see some tip burn on the plant caused by water stress. 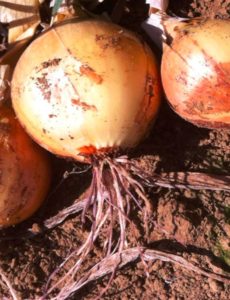 An onion with Pink Root

He said while there are no native Australian or New Zealand onion varieties resistant to the fungus, Seminis has recently introduced hybrid onions which are resistant to the effects of Pink Root.

“Hybrid onions with Pink Root resistance can grow in infected soils without the need for chemicals and soil fumigants.

“Pink Root will still appear in the plant, however its ability to uptake water and nutrients will not be affected,” Mr Ducatti said.

The new onion varieties have been developed and bred at Monsanto’s research station in Pukekohe New Zealand, and are already proving popular with growers in onion growing regions across Australia and New Zealand.

Mr Ducatti said Seminis is the only seed supplier in Australia and New Zealand to offer Pink Root-resistant varieties.